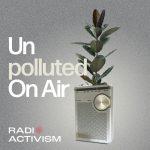 Unpolluted On Air
#25: Boomer or Zoomer, We Gasp for the Same Air

The eternal conflict between generations is also evident in the environmental struggle, more relevant
today than ever before.

The first unpolluted episode of Radio MARŠ in 2023 serves you the much needed “intergenerational
panacea” – intergenerational dialogue. RadioActivist Zinedin talks with a politically engaged pair of two
generations: Uroš Macerl, 54, and Samo Curk, 29.

Uroš is an eco farmer from the Zasavje region and a well-known environmental activist. With his Eko
krog association he fought and won an ardous battle against the Lafarge Cement factory in Trbovlje. He
was one of the proponents of the NO campaign against the harmful changing of the Slovenian Water Act.
Today, he is vice-president of the first Slovenian Green Party, VESNA.

Samo is president of the NGO called AETP – Animal Enterprise Transparency Project. The project aims
to develop a transparent practice of Slovene kettle farming and shines a light on the unethical, but still
mostly legal practice of slaughterhouses in Slovenia.

Zinedin chats with Uroš and Samo about their own intergenerational experiences, the lack of active
citizenship in Slovenia, and the unfruitfulness of the environmental policies of various Slovene
governments. There is not only whining, but also discussion of solutions for bridging the intergenerational
gap – from enlightened kindergartens to eco-nursing homes!